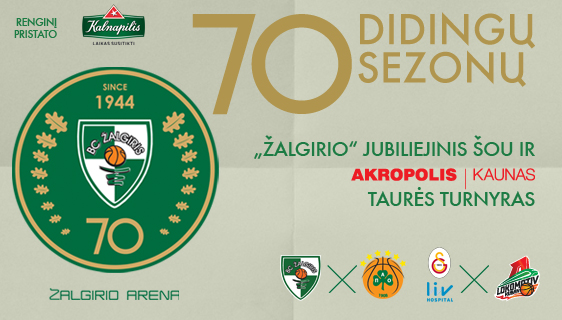 Zalgiris Kaunas took its first steps in 1944 and till this day it remains one of the best clubs in Europe. This season we celebrate its anniversary – 70 years of history. Anniversaries are not just about celebration, it‘s about taking time to appreciate the past, the present and the future. Therefore we believe that event “ZALGIRIS. 70 GLORIOUS SEASONS” will be a big tribute to the club with history full of great victories. The event will be held in Zalgiris arena in Kaunas on September 27 and 28 and will be comprised of two parts. The first day will start off with a breath-taking 3D show where the basketball court will serve as a big screen. With the help of 3D graphics and video projections people will be able to see the very best moments of Zalgiris history from the first steps to the future vision.
Zalgiris history, significant periods and the greatest victories of all time will be presented and honorable guests from Lithuania as well as from all over the world will witness it once again. The second part of the event will be the first time held “Kaunas Akropolis Cup” tournament. In the first semi-final Zalgiris team will face Panathinaikos Athens – a team that is no stranger to being Euroleague champion. In the second semi-final Galatasaray Istanbul will meet Lokomotiv-Kuban Krasnodar. On the second day of the tournament two more games will take place: the 3rd place game and the grand final. This tournament will be the first chance to see this season’s Zalgiris playing with a full roster. After FIBA World Cup all of the players from Lithuanian national team will join Zalgiris team. Last season all the four teams of “Kaunas Akropolis Cup” tournament were playing in Euroleague’s TOP-16, while Panathinaikos and Galatasary got in TOP-8 of the best teams in the Euroleague. Tickets to “Kaunas Akropolis Cup” tournament and celebratory event are sold online at Bilietai.lt.

Zalgiris and Zalgirio Arena invite the most loyal fans to... More »

Nemunas island will be buzzing this summer, as a new... More »